If you couldn’t already tell from the title, today is an action-packed day at Better With Veggies! You probably remember that I ran TWO races this weekend – neither for time, both for fun! I also participated in this week’s Tuesday Trainer video, where you can hear me talk about my most embarrassing workout moment (among other things). Let’s start with the first race of the weekend:

Dirty Spokes hosts great trail races in the Southeast. Both races I have done are very well organized (although the distances can be unreliable) and on beautiful trails around Atlanta!

I overestimated the amount of time it would take me to drive to Conyers, so I arrived at the race over an hour before the start. I am not an early arriver to races, especially running races, so I was bored out of my mind! Luckily I had twitter and facebook to keep me entertained as I stayed warm in the car. 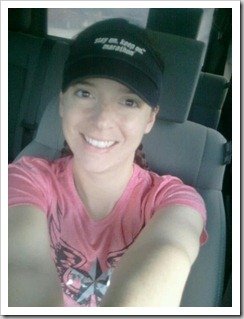 I parked right by the start, so I put on my running shoes and started getting ready just 20 minutes before the race began. As soon as I slipped on my normal shoes, the throbbing pain came back in my right pinkie toe (remember that from the marathon?)– apparently, my toe is still swollen. Dang! I had brought my performance shoes as a backup (Nike LunarGlide) and slipped those on instead. Not exactly trail shoes, but they worked!

Dirty Spokes posted a video of the race on Saturday night – so you can even see me racing at two different places around the course: 4:36 & 8:41! Look for me in the pink shirt and grey skirt.

I loved this trail! There were nice wide double-track sections, with plenty of room to spread out; followed by easy to moderately-technical stretches of single-track sections. I caught up with my friend, Jenn, a few miles in and made a deal with myself NOT to pass her. “This is NOT a race, I am having fun”. I had to keep repeating this at several portions of the race and reigned it back in. “Enjoy the scenery (just a little!).” But not too much, because I didn’t want to trip and fall today — I have another race tomorrow!

Jenn, on the other hand, earned 3rd place in our age group and some nice hardware!! 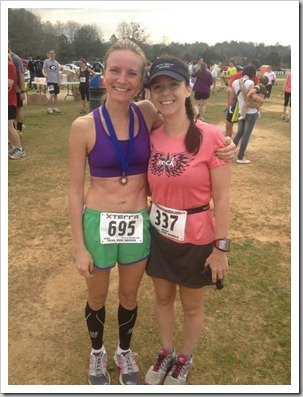 The downside of two races in one weekend, no chance to sleep in! Time to get used to weekend morning training again, anyway. =) In contrast to Saturday’s early arrival, I pulled into the parking deck at 6:45AM for a 7AM start. I dropped Kirk off, since he was actually racing, but still made it to my corral in time to ask a stranger to take the photo below and upload to twitter & facebook. Impressive right?! 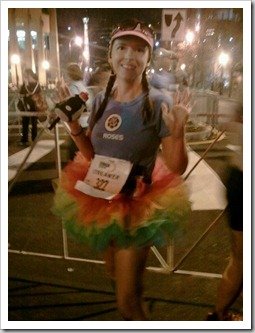 Just a minute after the gun went off, I was crossing the start line! Running in a tutu is AWESOME!! It’s funny that such a silly thing can be bring so much joy, but the extra cheering made this the most fun race I have ever done.

The first 6 miles flew by. This stretch of the race is fairly downhill and tends to be quick every year.

Edited: Since both Lee and Kirk disagree with my “fairly downhill” statement, I’m adding the elevation profile to let you make your own decision. 🙂 I still think it’s relatively downhill – look at the end of the race.

I was running by feel and with every passing mile marker, I knew I was running a little faster than I should. My math skills aren’t great while I run either and running without my Garmin was tough! I need a new Garmin that works!

Around mile 4 or 5, I heard a few people near me talking about the time and that they were running about a 8:30 pace. Uh – that’s too fast for me today – oops! I finally forced myself to slow way down and enjoy the course. The end of this course is hilly enough that I knew my 2 weeks post-marathon + 6 mile train run legs were going to be unhappy if I didn’t slow down. 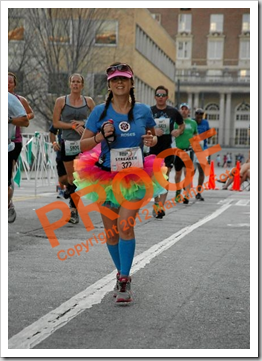 It was so much fun hearing “Go Tutu!” or “Love the Tutu” along the course. And the little kids pointing and clapping – that was pretty cool too! The tutu was actually really comfortable – it held my knock-off Spibelt in place. Note to self: take more time looking for a Spibelt at a race expo – the knock-off variety is not as good. Another product I obviously need to review! 🙂

Around mile 9, I started to feel my feet talking to me. I don’t run in these performance shoes for longer than 8 miles and I could feel the lack of cushioning. Nothing terrible, but it was there. I stopped around 9 miles to use the bathroom, thank goodness for no lines! This is also around the time that I know Laura was out cheering us on, but sadly I missed her. 🙁 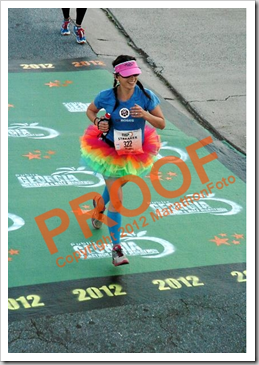 After mile 12, I was ready to be done. My legs were feeling a little heavy and I was relieved to think I only had a little over a mile left. As I crossed the finish line in 1:57:28, I was incredibly grateful at how far I have come. I can’t believe that a ‘”just run” race, the day after a trail race, 2 weeks after a marathon, with no goals, is still under 2 hours!

After the race, I had a great time chatting with Tina, Lindsay, & Lee, other running friends I hadn’t seen in a while, and dropping by the Team 65 Roses tent!

As I mentioned 83832730 times since the race – running in a tutu was SO awesome! It rubbed against my hands at the start of the race, but settled down a few miles in and I barely noticed it after that. I think this might need to be a new race outfit for me more often! I’m thinking the next addition to the outfit is a Better With Veggies race shirt. 🙂

The Verdict on a 2 Race Weekend

I wasn’t sure how I was going to feel running two races in one weekend, but I actually had a LOT of fun. They key is understanding the difference between races of different priorities – of which these were both “C” races. They were fun, no goals, just an event on the calendar to enjoy! I would race back-to-back again in a heartbeat, especially when followed by hanging out with awesome friends!

In case you’re not tired of me yet – I also shared a “Meet the Trainer” video on Lindsay’s List today for this week’s Tuesday Trainer. Head on over and check out my video and the other awesome ladies who submitted videos this week. How come I haven’t seen any guys participating in this fun feature yet?! 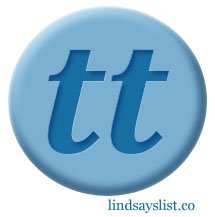