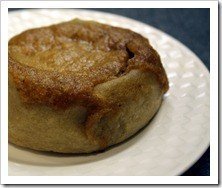 I am currently in DC, cheering on Kirk for the Marine Corp Marathon. While I’m gone – enjoy this breakfast treat that we enjoyed over the past week!

I typically make healthy recipes for breakfast, but this is not one of those recipes. I saw a few recipes for cinnamon rolls on several blogs this month and was really in the mood to make up a batch. I decided to indulge my pumpkin cravings with a pumpkin cream sauce, instead of a more traditional cream cheese sauce.

I enjoyed these cinnamon rolls all week, I would hate to see good breakfast sweets go to waster, after all. When I enjoyed this early in the week – I served it with a veggie breakfast sausage. The last few days, I added a dollop of Almond Butter on a heated roll. I like a little extra protein in my breakfast to keep me full until lunch! The next time I bake these, I would also try replacing some of the butter with canned pumpkin. I read recently that it makes a great substitute, which would certainly be healthier & amp up the pumpkin flavor in the recipe. If you give that a try, let me know how it goes!

I got a little crazy one morning and decided to enjoy a cinnamon spice roll with a glass of Kombucha – spiked with a tablespoon of chia seeds. It was an interesting flavor, not sure if it’s something I would add to my Kombucha very often. 🙂 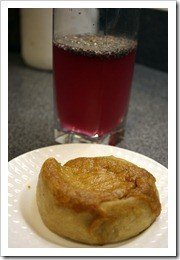 Question of the Day – What strange combinations of foods have you tried recently – either that worked or didn’t?