On Saturday morning, I had the opportunity to run a very unique 5k – Color Me Rad! I won an entry from Kelly and was excited to see what all the excitement was about. Kirk was intrigued enough that he came to spectate and run a few extra miles with me before the race.

We arrived really early (especially for me!), so that I could pick up my packet and run 5 miles before the 5K started. We left a little later than planned and there was some traffic getting into the parking area, so we ended up covering about 3.4 miles instead. The scenery was incredible – of course I didn’t think to stop and take any photos (I was focused, I guess). Just pretend there’s a beautiful picture of a pond, with trees reflected with changing colors, and mountains in the background.

The race started in a series of waves, about 300 at a time. They didn’t want too many people going through the color stations at one time, so that everyone could get plenty of color on them. I ended up started in the second wave and quickly realized this was more of an event than a race for many people. I spend at least half the race dodging people sauntering (not just walking…sauntering) along the cross-country course. I wasn’t planning to race, just covering miles to get the distance in for the day, but just jogging I passed at least 300 people. 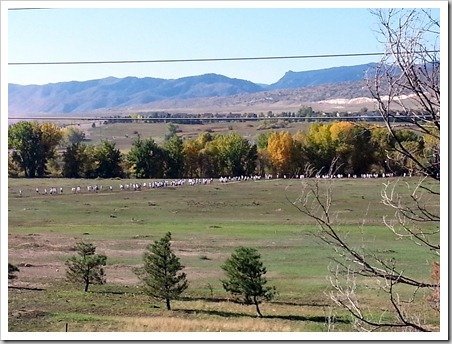 Every so often, you passed through the “color stations”. Each station was a different color – green, yellow, pink, blue, orange. Some station the volunteers threw powdered color on you, others were water-gun-like stations with liquid color. You could see the plumes of color around each station from pretty far away!

The last station was pink and I ended up with a big pile of pink right in my face – it was hilarious! I couldn’t even see though my glasses for a second and it even ended up on my teeth – seriously fun! 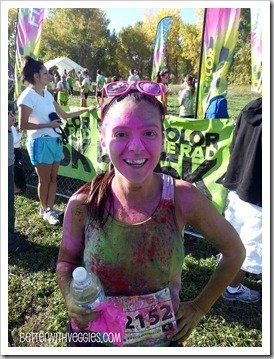 If you can’t tell how much paint I was covered in already, check out this before vs after comparison: Even though I ended up just running this alone, it was so much fun! I was dodging prairie-dog  holes, running through plowed fields, across grass, and over gravel…so.much.fun!

To celebrate my messiness, I decided I had to take a jumping picture before we headed home. These are harder than I thought to catch… 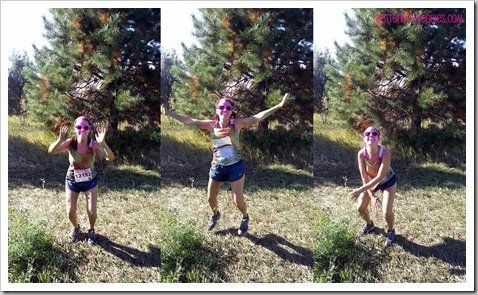 I heard that runner who showed up a little later for the race ran into some pretty bad traffic. I was really impressed to see the race organization address that problem the same day via email, offering to do whatever it takes to make those people who were unhappy…happy. I think that’s a pretty amazing response – way to go!

My recommendation, if you have a Color Me Rad event in your area – sign up! And maybe plan on getting there a little early to avoid any traffic issues. And get ready to be covered in color and happy!

Disclosure: I won a free entry to this race from Kelly as part of a promotion from Color Me Rad, but all opinions are my own.