After the Chicago Marathon in 2002, I wasn’t feeling excited about running. That race had been mentally difficult for me and I wasn’t able to meet most of my goals for the race. I decided I needed a change to break out of my rut — enter: triathlons. I remember a friend of mine talking about doing triathlons after my first marathon, but it wasn’t something that interested me at the time. When you’re tired of running all the time, though, a triathlon sounds like a great idea!

I searched the internet (my trusty research tool) and found a beginner triathlon training plan that I printed off and posted on the fridge. I pulled out my old mountain bike from college, bought a pair of goggles & swimsuit – and I was ready to go! I was lucky that Kirk was a swimmer growing up, so I enlisted him to take me to the pool and show me what to do. I swam a bit in middle school with a neighborhood summer swim team, but I was the kid who swam in the exhibition lane (read: not a good swimmer).

In my first triathlon, I struggled the most with the swim. My wave was given the signal and I put my head down and swam…for about 3 seconds before I stood back up, panicking. The water was brown/green and I couldn’t see a thing! And it was cold – I felt like I couldn’t breathe! I started and stopped a couple more times, before I finally flipped over on my back and “backstroked” the 400 meters to the finish. The bike was also a surprise –  I knew something was strange when a guy passed me on his bike coasting down the hill, while I pedaled my heart out. No one told me how much faster everyone around me would be, because their bikes were so much lighter than mine. I was 3rd to last in my first triathlon, but I was a triathlete! 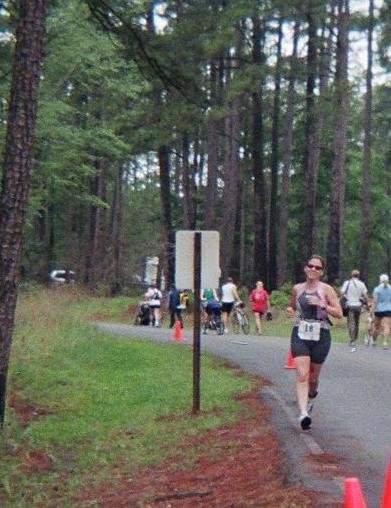 Over the next few months, Kirk was gracious & patient enough to help me get over my fear of open water swimming. My second race went much better and I was actually able to swim freestyle most of the way. We celebrated by buying my first road  bike to end the summer! At this point, I was officially hooked on triathlons. I found a great beginner website for triathlons (beginnertriathlete.com) and trained for sprint and olympic distances races for the next year. I joined a local triathlon club, so I would have fellow “crazy triathletes” to bike & run with – which brings that social aspect back into training. Going for a ride, followed by dinner & drinks with the group at a local restaurant is lots of fun! 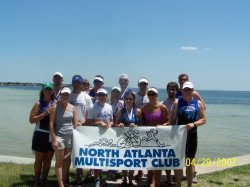 Tips I would give someone looking to try a triathlon: