Last Friday, I started a series of cookbook reviews. I kicked off the series with a review of the Peas and Thank You Cookbook. This week I’m moving on the next cookbook that I bought, Thrive Foods by Brendan Brazier.

For those who aren’t familiar with Brendan Brazier, he is a former professional Ironman triathlete who transitioned to a plant-based diet to optimize his performance. He is also the creator of the Vega nutrition line. 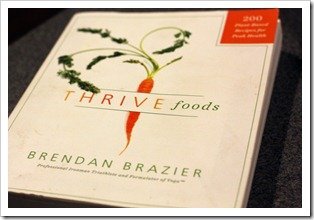 The first half of the book is packed with information about nutrition, how food impacts the environment and health, and a breakdown on the what makes food healthy (like antioxidants, essential fats, phytonutrients, etc) and examples of each. I read this section on a flight and really did learn a lot! I thought the section on the emissions generated to create the food in a standard American diet vs. “healthy” American diet vs. whole foods (plant-based) diet was intriguing. In the example in the book, a plant-based diet following the principles in Thrive Foods requires over 4000g less CO2 than a “healthy” American diet and over 8000g less CO2 than a standard American diet. He goes into much more detail in the book around this, of course.

The second half of the book is recipes (over 200). This is where I think the book could have used a LOT more pictures. There are a few color pictures in the middle of the recipes, but I’m a very visual person and I am drawn to photos of food in cookbooks. Where last week’s cookbook had photos of every recipe, Thrive Foods only has 7 photos out of 200 recipes. I think it took me longer to really start cooking from this book because of the lack of visuals.

However, if you can get beyond that and read the recipes, there are some great choices! Here are some pictures of the meals I have made over the past few months out of this cookbook: 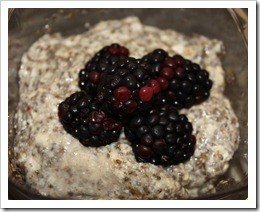 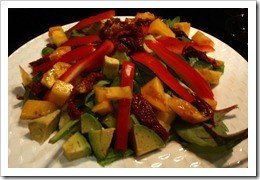 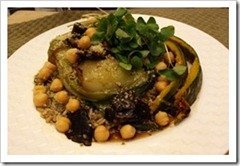 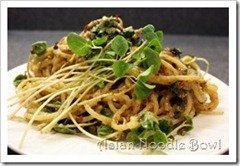 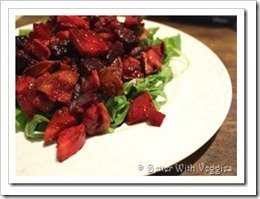 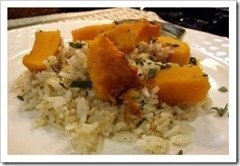 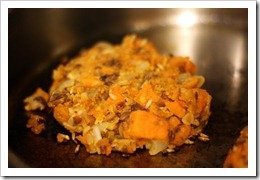 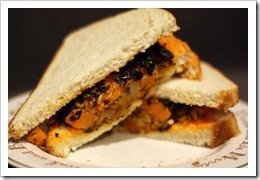 The recipes are a mix of those from Brendan Brazier and from different chefs from restaurants around the US & Canada, including: Blossoming Lotus, Candle 79, Pure Food & Wine, and Veggie Grill. For athletes, there are also several of Brendan’s recipes for homemade gels, sports drinks, and recovery drinks! The variety is great: shakes, snacks, quick meals, sauces, gourmet meals, sports nutrition, and desserts!

From these recipes, I would say 80% are those I would make again. For those that I wasn’t a huge fan of (like the Chia Pudding), I think there are small changes to make it have a little more flavor. From a time perspective, there are quick recipes, but also many recipes that take a little more time (1+ hour) to prepare.

There are also more ingredients in this book that are less known and you may have a harder time finding. For example, hemp seeds (which I have found at Whole Foods), Sacha Inchi Seeds, & Kelp Noodles. What you won’t find is the faux “meats”, like seitan, tofu, etc. I think cooking from this book takes a little more investment to stock up on ingredients you may not already have in your pantry, but they are things that will last a while once you’ve purchased them (like the hemp sees & hemp oil).

All in all, I would recommend this book for someone who is interested in more whole food recipes, some great information about the benefits of a plant-based diet, and doesn’t mind spending a little more time in the kitchen.

If you’ve tried Thrive Foods – what is your favorite recipe? Do you like cookbooks that include more complex recipes or are you a quick-cook type of person? Have you ever tried to make your own sports nutrition (sports drink or gels)?

I have tried one of the gel recipes in the book and liked it (although I’ll reduce the lemon juice), but found I always forgot to make it ahead of time. For me, packaged gels are easier right now.

« How To Fuel Your Running (Part 2)
Weekend Recap »