Last Saturday I had another one of those days where I take 110% advantage of living in Colorado. Yup, that’s over 100%. Hiking a 14er alone is taking 100% advantage, but when you wake up early to start with a yoga warm-up at Red Rocks, you get extra credit! 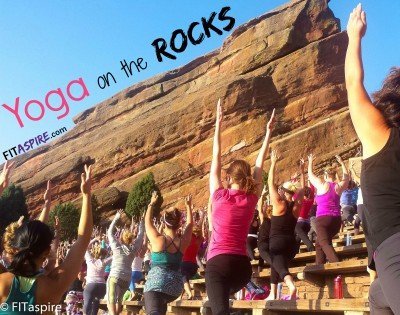 Yoga on the Rocks

As part of the giveaway for Yoga on the Rocks I hosted a few weeks ago, I got 2 VIP tickets to experience it for myself. I brought my friend Aly (another bikini competitor) and we enjoyed a beautiful morning with over 1500 other yogis.

What I didn’t now is Aly is a hard-core yogi and is getting ready to start yoga teacher certification classes. Between her and Kait (who we met up with after yoga), I was surrounded by some talented women! I know yoga is not about comparison, but I’m allowed to appreciate the skill of others. 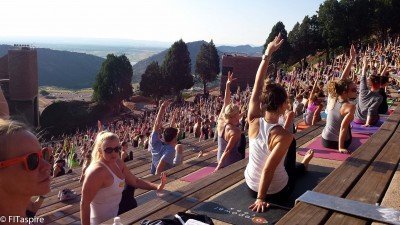 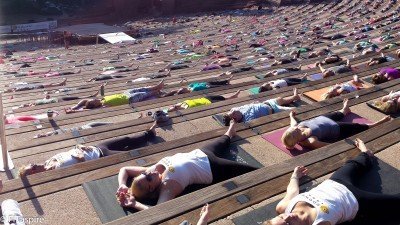 After almost an hour of practice, we reached Savasana  and enjoyed a blissful few minute of rest under a perfect blue sky. You couldn’t have asked for a better day!

We found Christel and one of her friends (Sara), then convinced some girls to take some fun photos for us. After these photos, we found Kait too! Before we knew it, it was almost 8:30 and I knew we had to get on the road to hit Bierstadt. I have yet to start a 14er early, but I knew we were really pushing it this time. 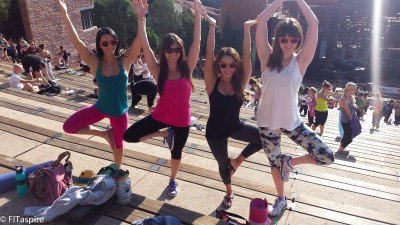 To add to the time delay, we hit major traffic on I-70 (construction on the tunnel) and didn’t hit the parking lot until just after 10AM. Yikes!  Most people will tell you that you should be back to your car by noon to avoid our afternoon storms, I try to hit the treeline (on the way down) by that time. In this case, we didn’t start until after 10:30, as we had a little trouble locating the start of this trail!

We did have the opportunity to see these adorable bighorn sheep rams on the drive up to the trail! We had to stop and take pictures, because we had no idea what they even were until we googled them later. Animal sightings are worth an even later start, right? 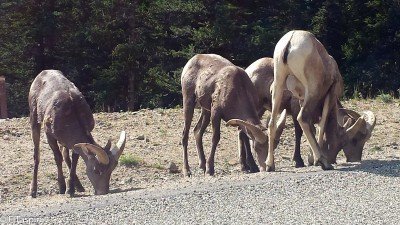 Mt Bierstadt is very different than both Gray’s and Quandry. The hike actually starts with a slight descent and crossing over boardwalks built over marshy areas. I would estimate it was downhill to flat for almost a full mile, before you start a gradual ascent on switchbacks up the mountain. The full first hour of hiking was pretty easy and we chatted easily without any labored breathing. 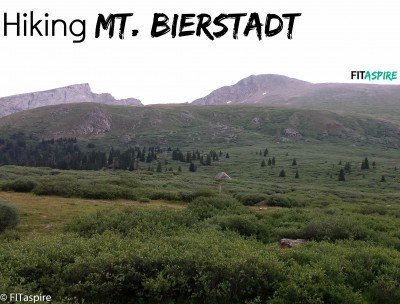 The angle of the climb changes abruptly and the hike goes from easy to “14er hard” pretty quickly. The change in difficulty gives you the excuse to take a few breaks and look around and the amazing views all around. You’ll notice we had quite a bit of cloud cover in these photos, which we both kept our eyes on during the hike. We almost turned around 3 times, but by the time the weather was actually coming at us, we were almost at the top and chose to continue.

The last 30 minutes of the hike was really tough. When we hiked Quandry, it never got steep enough to get really hard (more technical). Bierstadt was more like Grey’s in that way, where you had to take a lot of breaks at the end. Hike, recover, hike, recover…check out the clouds…hike faster for a few steps, recover.

[Tweet “Another #Colorado #14er to add to your bucketlist – recap of Mt. #Bierstadt. @FITaspire”]

The final climb to the peak is a boulder field and the difficulty comes from finding a good path. But when you reach the peak, you remember why you started. The views and feeling of accomplishment are completely worth the breathless climbing! 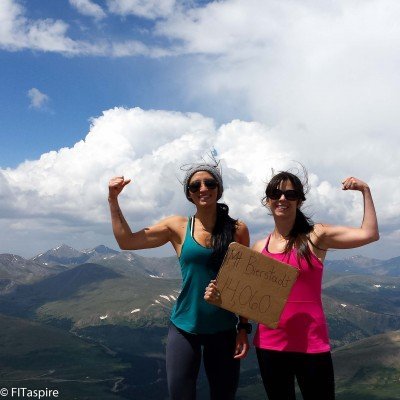 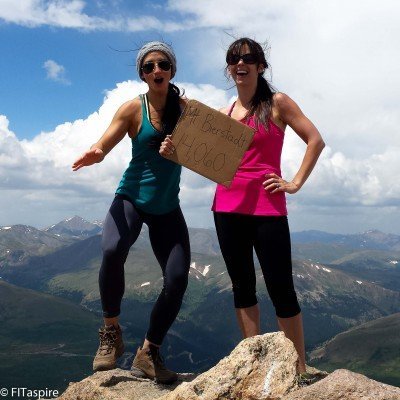 We spent more time at the top than we planned, but it was too much fun. This was Aly’s first Colorado 14er (and my third) – how can you not celebrate that? We stripped out of our jackets and braved the cold air to get some fun photos. We weren’t the last ones up (believe it or not!), so we found some friendly girls who did a great job being our photographers for a while.

The descent back down over the boulder field was tough. We made it tougher by aiming a bit too far down the mountain and crossing the boulders for even longer than the “typical” path. It’s a good thing we are both in good shape and used to this sort of thing! The descent was uneventful, other than it always seems to take longer to go down than you think. We had about 5-10 minutes of tiny hail and rain when we were almost back to the car. We really lucked out with the weather and our late start! 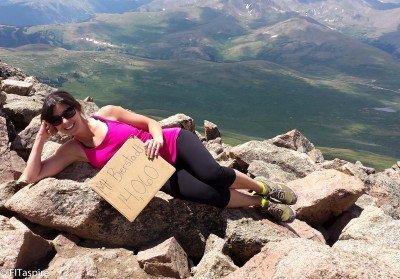 Total roundtrip time was somewhere between 5 – 5:30 hours, including a 30 minute break at the top. For more 14er adventures, check out my recap of hiking Gray’s Peak last year and Quandry Peak a few weeks ago.