Even if you don’t like to run, you have to be impressed with someone who runs 100 miles! And when they run 100 miles in the Colorado Rockies with elevations starting at 9200 feet and climbing to 12,600 feet, you might think they are a little crazy. And they are…but after volunteering for a few hours on Saturday morning, I kind of want to be crazy like that too. Some day.

The Leadville Trail 100 was created as a way to make Leadville famous during the economic downturn in the early 80s. It’s an out-and-back race (50 miles out, turn around, run 50 miles back) that you have 30 hours to finish. I volunteered at the first aid station (May Queen), just under 13 miles into the race. My shift started at the same time as the race – 4AM. Yep, freakin early! 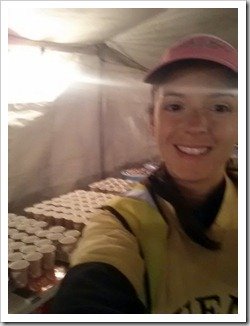 I spent the first few hours helping to prep the buffet of food the racers would have to choose from. I filled huge bowls with quartered peanut butter and jelly sandwiches, I was pretty efficient at making and cutting those suckers! And I didn’t eat a single one. 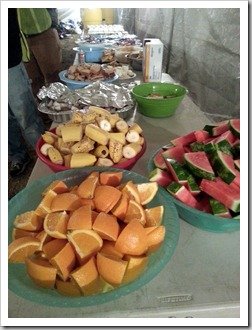 The tent was set up in stations – bag drop where the athletes enter, chairs for resting (not really used until their return trip late that night), and the “buffet table”.

Once the first racers came through, I was glued to those 2 big water coolers at the end of the table. My job was to help get racers’ water bottles refilled as quickly as possible. It was pretty cold in the morning, so that usually meant me taking the bottles (or camelbacks), opening them, filling them, and putting them back together. That was pretty easy until the rush hit and we had a line of racers waiting for water. Chaos!

I was so impressed with these athletes – just starting a very long day and with smiles on their faces. Check out this elevation they contended with:

That big peak is Hope Pass – about 3000 feet of climbing in less than 5 miles. Makes me feel a little guilty about complaining about the hills in my neighborhood. 😉

Everyone was incredibly nice, thanked us volunteers, and got back on the “road” quickly. We did have one grumpy crew-member who decided we weren’t moving fast enough, got in racers’ way, and cussed out one of the volunteers, but we’ll forget her.

When I finally looked at my watch, it was 8AM and things had quieted back down. This is one of those races that I am adding to my bucket list. I’m no where near in shape enough to do this anytime soon (I’m thinking this is at least 5 years in my future), but it would be an amazing accomplishment. In the meantime, I hope to make volunteering here a regular event. 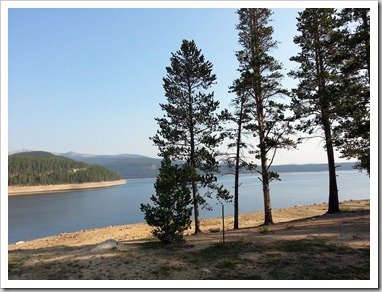 This was not a week of workouts that went as planned, but I’m happy with most of the week anyway. I missed one strength training session, as I ran out of time on Friday and had to drive to Leadville. Sunday’s long run was miserable – I mean really miserable. As much as I tried to push through, I called it a day at about 13.2 and decided I wasn’t running enough to make a difference. After talking with Kirk about my long runs, I’m going to be driving to a flatter location next weekend. I also realized that I haven’t been bringing nutrition on these runs. I have been testing out some big changes in nutrition, but intended to have calories for runs over 2 hours. I passed that mark a few weeks ago, but didn’t realize it. Hopefully flatter + calories will equal less misery next weekend.

This week is a recovery week (thank goodness), but I’m not cutting back my long run distance. I’m also going to cut back my strength training to 3 days a week and am creating my own workouts again. I LOVED the Making the Cut program and am borrowing some things from my experience as I move forward. I’m very happy to have a rest day back in my schedule!

Saturday is also our wedding anniversary, so I hope to get that long run out of the way early!