A few weeks ago, Kirk (my hubby) called me from Sacramento to tell me he found a donut shop that made vegan donuts: Doughbot Donuts. I immediately asked him how many he was bringing home. His answer? None! 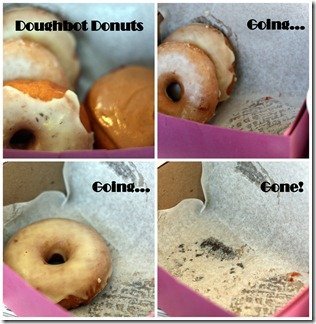 When I asked him why in the WORLD he wasn’t bring me home  donuts? He hadn’t actually gone yet, but found them in a local magazine while doing research for my 50K race. 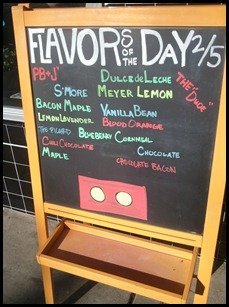 Since I didn’t think donuts were the right pre-run fuel for the race, so we made plans to go on Sunday morning before my flight home. Donuts are a good thing to dream about while running! From checking out the Doughbot Donuts website, I had my heart set on a vegan Bacon Maple Donut.

Did you know that Bacos bacon bits are vegan? 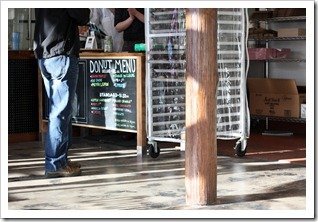 Unfortunately, those were not on Sunday’s menu. I know…I was disappointed too. Luckily, there were several other delicious options to choose from.

After some arm-twisting, Kirk convinced me to order a box of 4, so I would have some to enjoy on the plane or when I got home.

I started with the PB&J donut. Look at all that peanut butter slathered on the jelly-filled donut. Um. yea, this was good! In hindsight, I probably should have saved this one until last. It was the richest of the 4 donuts and my favorite flavor combination. 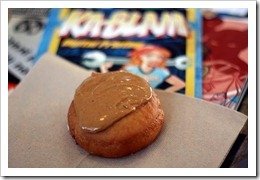 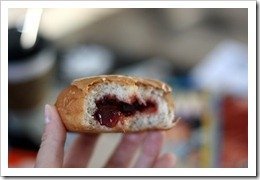 Next up, Lemon Lavender – if you look closely, you can see bits of lavender in the glaze! Good flavor, but I do think the lavender was overpowered a little by the lemon. 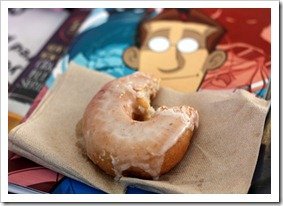 I’ve eaten two donuts for breakfast, surely it’s time to pack up the box and save the rest for later. Yea right! Although I had heard these donuts were heavy, I found them fairly light (for donuts) and I happily continued to eat!

I devoured the Vanilla Bean donut next, which had tiny flecks of vanilla visible in the glaze. Another good donut, but the most normal of the bunch. 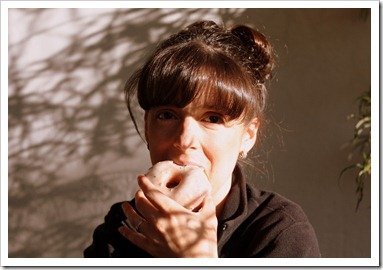 There’s no point in saving just one donut and I did run 31 miles the day before, so I obviously had to eat the final donut – Maple. This one was delicious, a nice strong maple crust! 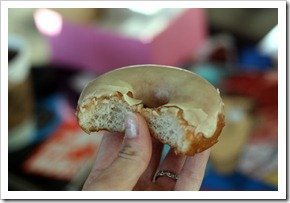 I’m officially craving donuts, how about you? Unfortunately, that’s the end of the Doughbot Donut box. 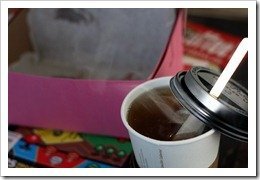 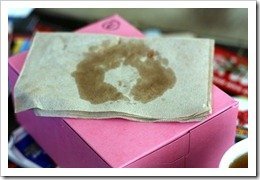 You’ll see I also enjoyed a nice cup of Gunpowder Green Tea, which may not be the typical donut drink, but was just want I wanted.

If it wasn’t obvious from all the photos above, I loved these donuts. They were delicious, not-overly-heavy, and offered a great variety of vegan options to choose from!

I will say that I’ll never understand why bakeries creating such delicious vegan donuts don’t make ALL their donuts vegan. Many of the other flavors could have been easily vegan, opening up their options even more, but I know that’s a personal choice. I’m thrilled that they offered the vegan options they did!

I still hope to try that vegan Bacon Maple donut in the future. Kirk is going to make another visit to Doughbot Donuts today before heading back to Atlanta, so I’ll keep my fingers crossed!!

This review is my own opinion and I was not compensated in any way for my thoughts or opinions – although if Doughbot Donuts would like to send me some donuts in the future, I would not be opposed to that. =)

Have you entered the Vega Sport Giveaway yet? Remember that you can earn an extra entry every day (through Saturday) by tweeting about the giveaway! Don’t miss out on your chance to try one of these awesome products!

What is your favorite flavor of Donut? Any donut recipes that you would like to share? I really need to get a donut pan, so I can try out some of my own!

« Do Shoes Really Matter for Running?
An “Event-ful” Weekend Recap »