I am not a baby shower person. I know that is not a popular thing to say – but I’m being honest! I think it’s because I don’t have kids and I’m not thinking about having kids, so talking about a soon-to-be kid is not my thing.

Now once the baby is out and moving around – that’s a totally different story. I love actual kids, just not talking about the having of kids. 🙂 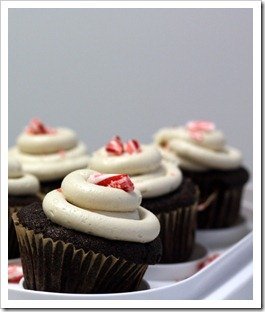 One thing I can get excited about is baking for a baby shower! It’s an excuse to make goodies and help answer the “what do you eat” question all at the same time. In this case, I’m also pretty excited about the way these cupcakes turned out!

I made the cakes on Tuesday night and stored them in tupperware overnight (unfrosted). I tried to picture how I was going to get 24 frosted cupcakes to work unharmed and couldn’t envision a happy ending. So, I decided to bring in the frosting and make the cakes into beautiful cupcakes before the party! 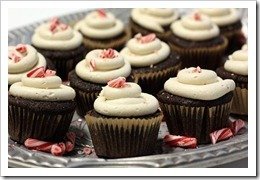 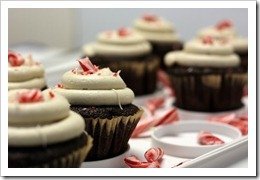 I made the frosting before work and filled a make-shift icing bag (a gallon ziploc, with a small hold cut into the corner to fit the icing tip) to the brim. . Did I mention the party was a surprise, so I had to make sure the guest of honor didn’t see any of this. 🙂 I booked a conference room over lunch to have a place to ice the cupcakes without getting caught. It was also a convenient location for an impromptu photo shoot of the completed desserts. Normal stuff, right!? 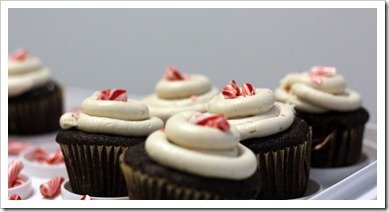 The icing of the cupcakes went pretty smoothly & I crushed a bag of candy canes as quietly as possible before topping the treats and decorating the trays.

While I kept the guest of honor busy in another meeting, the room was decorated and food transported for the party. Despite the “Shhh….It’s a Surprise” meeting reminder that inconveniently popped up on the screen during our pre-meeting (thank goodness she was looking elsewhere and I dismissed the reminder quickly), Sara was still surprised and the party was a success!

The cupcakes were a great success – they disappeared quickly and I got several requests to share the recipe.  Many people were surprised that they weren’t purchased from a bakery – a high complement in my opinion! 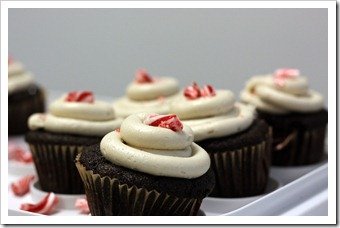 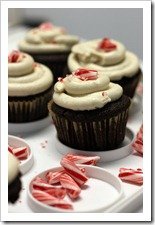 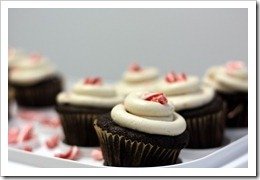 I wish I could take credit for this recipe, but it comes from the talented Angela over at Oh She Glows. You can get the full recipe for the Chocolate Cupcakes & Vanilla Almond Frosting on her site. The only tweaks I made was a little longer baking time (about 30 minutes – typical in my kitchen) and replacing the almond extract for peppermint extract in the frosting. Of course, the final touch is smashing candy canes (or any peppermint sticks) for the presentation. I took smallish pieces and individually placed on each cupcake. Then sprinkled the tiny pieces over all cupcakes to try to get a peppermint sprinkle effect. Finally, the larger pieces are for scattering around the cupcakes for effect. 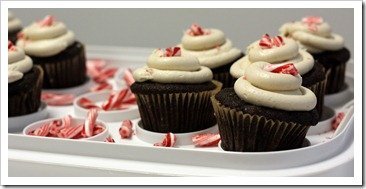 These cupcakes are light, airy, and delicious – so what are you waiting for? Did I mention the batter for both the cake & frosting begs to be eaten directly from the bowl?! I may or may not have had more than my share while baking. 🙂