I’ve been meaning to write this post for a while, but there is always something else that fills the space. Maybe that’s me avoiding the topic (although I don’t think that’s it) or maybe it’s because things are simply busy. Either way, it’s time to clear the air and share an update on my eating habits.

I eat meat. I guess the title of this post gave that away already. If you like labels, I’m choosing Conscientious Omnivore. I don’t really like labels, but they are all around us. I don’t know where the term came from, but I read it for the first time on a Vega survey and it stuck with me. It fits. 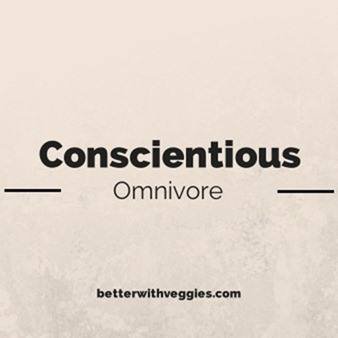 Conscientious (adj.)  A person wishing to do what is right

I thought about this for months before I actually had my first bite, as it’s a big shift. I decided to stop eating meat mostly for ethical reasons, but different than many ethical reasons that I hear about. For me, it’s about how the animal is treated during their life, instead of having an issue with killing the animal for food. We live in a society that values life less than it should and my way to stand up against this was to abstain completely. It has (thankfully) become more common to find sources that do value the life of the animal, which is why I started thinking about adding this back into my diet. I still don’t agree with factory farming practices and will happily pay more to know that the food that I eat comes from organic, humanely-raised, natural sources.

There were many other benefits of eating a plant-based diet that I discovered along the way. I still believe these are true and I think that most people can thrive on a plant-based diet! My fastest marathon & ultra-marathon race times are from when I was completely plant-based, so this change is not about athletic performance. I find it easier to train for fitness competitions when I eat fish & seafood (affiliate), but I know that can be done successfully without animal products. For me, the flexibility in diet became a bigger draw than the health benefits, so I have made the choice knowing this.

So why am I changing?

I can’t point to any one reason, but I think the biggest draw for me was flexibility and freedom. While I rarely struggled with finding things to eat before, eating at friends houses was always tricky. More for my friends than for me. I also really enjoy being able to go out to eat and get the Prix Fixe menu, without having to talk to the chef about my dietary preferences. It’s a relief. I appreciate all that I learned about how to make it work anywhere, but now I don’t have to make it work. That is nice, I admit it!

As I mentioned above, it’s so much easier to find humanely-raised meat than it used to be. Our neighbor is a hunter and brings back tons of wild caught game that fills our freezer. We buy our meat at Whole Foods and choose those items as high on the Animal Welfare Rating Standard as possible. When I eat out, I will often ask where their meat is from and look up the farm to see how they are rated. I don’t always do this, I admit.

As I stressed when I added fish back to my diet a few years ago, this is NOT about getting more protein. Eating fish or meat is not necessary to get enough protein. I will continue to fight against that myth!

I’m still the same person – nothing has changed here! I still enjoy cooking and eating food. I love creative and delicious plant-based (vegan) foods. My eye is still drawn to the vegetarian entrée at a new restaurant that I visit. Sushi is still a delicious treat and one of my favorite things to make at home. It’s just that I’m also throwing in some meat a few times a week. I know that might be offensive to some, but I think that most people can respect that my choice is for me. I’m not looking to change your eating habits one way or the other.

This has prompted a re-evaluation of the blog…. “Better With Veggies”! This name has served me well for almost three years now, but it hasn’t felt right to me for a while now. I am still a girl who loves her veggies, but I also love fitness and inspiring others to reach their goals. The focus has shifted and you’ve probably seen that in my posts over the past several months. BWV doesn’t capture this as well as I’d like, so it’s time for a refresh. Next week, you’ll see what I’ve been working on over the past few months and I hope you’ll stick around to share that with me!